jQuery animation plugins allow you to animate your websites content elegantly to make it more beautiful and eye-catching. With jQuery animations plugins you can create various text effects, side scrolling, progress bar loading, navigation effects, spinners and loaders and many more.

For this roundup we have compiled a list of 20 jQuery Animation Plugins that will enable you to create some stunning animations for your websites and projects. Feel free to share your thoughts with us by posting a comment below.
Enjoy !!

jQuery.scrollable manages animated scrolling in windows, scrollable elements and iframes. It frees you from handling gotchas and edge cases and offers convenient, flexible options for animation.

This plugin allows you to (currently) do full-page 3d perspective transforms base on mouse position. There are a lot of options you can tweak to your liking, and I’m looking to develop the application of this effect further.

fakeLoader.js is a lightweight jQuery plugin that helps you create an animated spinner with a fullscreen loading mask to simulate the page preloading effect.

gifplayer is a customizable jQuery plugin to play and stop animated gifs.

waitMe is a jQuery plugin for easy creating loading CSS3 animations. Plugin use css3 animation, and works on all browsers and IE10+.

LetterFx is a a jQuery plugin to apply animated visual effects to text - letters, words & custom patterns. LetterFx works by temporarily injecting markup into the text of an $("element") and sequentially adding & removing transition-based CSS classes.

jQlouds is a jQuery plugin that let's you create clouds on the fly. There are some options to customize plugin.

Goal Progress plugin allows you to create an animated progress bar using jQuery. Just fill in the required input and the plugin calculates the progress of your goal and animates the bar. You can specify text to put before and after the amount raised.

scrollReveal.js is a javascript plugin for declarative on-scroll reveal animations. It's simple way to create and maintain how elements fade in, triggered when they enter the viewport.

SlipHover is a jQuery plugin to apply direction aware hover animation to images or any other elements.

Magic layout is a JQuery plugin by which you can animate all the elements on the page. There are 36 CSS3 animations that gives a huge advantage in performance. The plugin follow Responsive Web Design and it is fully adapted for mobile devices. Magic layout is simple to set up.

jQuery plugin that animates a full height screenshot (or any image) within a parent div to simulate a user scrolling the page. 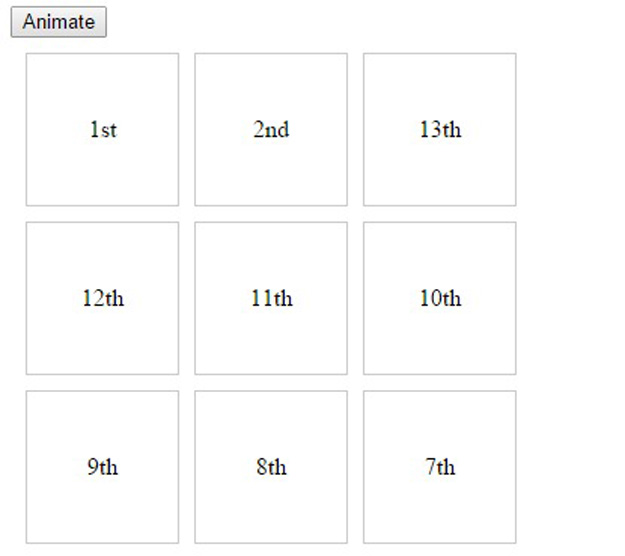 Flot Animator is a jQuery plugin that will add smooth or gradual animations to your Flot charts, Flot Animator will allow you to highlight and draw attention to some charts and/or series by easily adding animation to your existing charts.

Animelt is a jQuery plugin that allows you to run complex animations on your web page.

jQuery Waiting is a jQuery plugin to generate spinners and loaders, without images, canvas, or other nonsense. jQuery Waiting uses standard, widely accepted css to style your waiting spinner, and a little jQuery to make it function.

JZoopraxiscope is a jQuery plugin for making animations from static images inspired in Eadweard Muybridge's Zoopraxiscope.

Bouncy Navigation is a full-screen navigation, with floating menu items. CSS animations and jQuery used to animate navigation items, and let them bounce in and out the screen.