jQuery 360 Degree Image Rotation Plugins allow you to display images in any wide 360 degrees angle, which you can use for your ecommerce, portfolio and business sites to help customers look products in detail, from any angle they want.

For this roundup we have chosen 15 jQuery 360 Degree Image Rotation Plugins for our audience, following plugins are capable of displaying images in 360 degree angle to deliver better end user experience to your customers. Feel free to share your feedback by posting a comment below. Enjoy !!

This is a jQuery plugin to create 360 degree product image slider. The plugin is full customizable with number of options provided. The plugin have the power to display images in any angle 360 degrees. This feature can be used successfully in many use cases e.g. on an e-commerce site to help customers look products in detail, from any angle they desire.

A panorama is a wide-angle view made from a series of images combined together using special software. It offers a very realistic experience, giving the sensation that the user is right there on the location. The plugin manipulates such a panorama image and uses jQuery to rotate, add hotspots and integrate it on mobile, touchpads and desktop browsers. 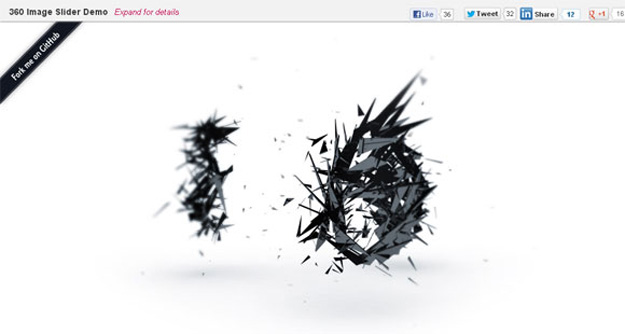 360 Degree Image slider has been created by using JS, CSS and a pre-rendered image sequence, which enables the user to drag and spin the 3D object around its y-axis using simple mouse or touch events.

Dopeless Rotate is Jquery plugin for 360 degree product visualisation. It comes with number of features such as zooming function, support of touchscreen devices, preloader for loading zoomed image, ability to use multiple instances on a single page and many more.

With Expo360° you take showcasing products on your website to the next level.Your customer not only gets a better look and feel of the product that you are presenting, it also is a cool feature on your website that will blow everyone away! What makes it even more unique is the extensive set of configurations possible. It allows you to create a look and feel that will match your online presence perfectly.

3dEye.js is a lightweight and fast jQuery plugin that allows you to create 3D view of an object by images. It is mobile/touch friendly and supports all the major browsers. With this plugin you can rotate the object using the mouse to presents 360 degree product images on the website.

Reel is an established and the most versatile three-sixty player for jQuery. Teaches your ordinary image tag some new tricks turning it into a gorgeous interactive 360° object movie, panorama or stop-motion animation.

SpriteSpin is a jQuery plugin that turns image frames into animations. It requires an array of images or a stiched sprite sheet and plays them frame by frame like a flip book. The aim of this plugin is to provide a 360 degree view of any kind of product. The plugin is built with extensibility in mind and allows web developers to customize the behavior and presentation of the animations.

jQuery Threesixty is a small plug-in that enable you do build flash-like “panorama” or 360 degree view of an object in a non-obtrusive way.

A wordpress jquery plugin for viewing image panorama. It is super fast and optimized coded and with a new way to add image in the website that makes the loading process faster. You can use it for any purpose like either your real estate property view or your wedding or room view. In a short, it’s all you want for a panoramic view.

AJAX-ZOOM is a unique “Flash” free tool to present 360° product images on the web. Users can rotate 360° object (the sprite contains a set of single images), also on Z-axis (3D multirow) and additionally deep zoom on every frame.

This viewer uses a list of images to simulate a 360 degrees object rotation or object animation. The multiple interaction methods makes is usable even on touch devices.

A super lightweight (just 27 lines of javascript codes, less than 1kb unminified.) and easy to use jQuery plugin that allows you to rotate a product image 360 degrees by mouse moving.

A jQuery plugin that sets a division to rotate between images (or other things) as if they were on the faces of a cube.

The 360 degree Javascript viewer is a jQuery plugin that produces a beautiful 360 rotation effect on images.